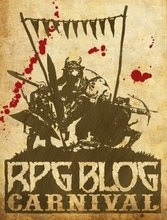 This series is part of the 5th RPG Blog Carnival - "Trasitions & Transformations" hosted by Critical-Hits.com. The topic of this series is WAR - one of the greatest transformational forces known.War means change. Sometimes for the better, often for the worse. The role that player characters play in a campaign set against the backdrop of war may be one of aggression, of peace, or it may be that the ongoing war merely provides a backdrop, and nothing more, for an ongoing story that has little to do with the larger conflict. This post, and the series that follows, will cover war-time campaigns and possibly how the past 30+ years of D&D development might influence the way we might create 4th Edition Dungeons & Dragons skill challenges for war-time campaigns.

"What is war? It may be described as one of the most important affairs to the state. It is the ground of death or life of both soldiers and people, and the way that governs the survival or the ruin of the state. So we must deliberately examine and study it." -- Sun Tzu, The Art of War.

My current 4th Edition Dungeons & Dragons campaign is set in a backwater area of the 3.5 Edition Forgotten Realms Campaign Setting: The Great Dale. Without providing too many details of the story line - suffice it to say that the campaign is set against an ongoing war between The Burning Man's blightspawn army and a loose confederacy of clanholds and villages held together by Circle of Leth, a druidic enclave based in The Forest of Lethyr. The player characters have just overcome a major obstacle, but now are faced with being trapped inside a city (Yeshelmaar) that is surrounded by no less than 10,000 angry blightspawn zombies.

This got me to thinking: How could I come up with a skill challenge to mediate their escape from the city without sacrificing some good roleplaying?

Then I started thinking: What sort of skill challenges in 4E would need to be created for war-time campaigns?

and... How has Dungeons & Dragons, in general, handled campaigns set against the backdrop of a greater war in the past?

The 4E Dungeon Masters Guide offers up War as one of many campaign themes.

"Warfare in a fantasy world is rife with opportunities for adventure. A war campaign isn’t generally concerned with the specifics of troop movements, but instead focuses on the heroes whose actions turn the tide of battle. They might be sent on specific missions: capture a magical standard that empowers undead armies, gather reinforcements to break a siege, or cut through the enemy’s flank to reach a demonic commander. In other situations, the party might support the larger army, by holding a strategic location until reinforcements arrive, killing enemy scouts before they can report, or cutting off supply lines. Information gathering and diplomatic missions might supplement the more combat-oriented adventures." -- 4E DMG.

For the new DM, this would seem great! Sounds aweshum and a great way to set up a campaign. But then it dawns on you: how will I actually handle all those different events the authors suggest? What if my campaign is at the Paragon or Epic level - am I actually going to have the players spend a hour or more killing legions of lowbie orc soldiers or kobold skirmishers? The answer is obviously No.

The solution is to develop skill challenges that can mediate the outcome (from the PCs point of view) of mass-combat, key missions, and other important events that might occur during the greater conflict. Can the five level 12 heroes defend the tower from 200+ orc legionaries who are ten level below them? You certainly don't want to roll dice, or even think about running a combat encounter, for that many opponents. Instead, I would recommend using a skill challenge to find out. This is not to say that true combat encounters are verboten - it is after all 4E D&D, a game that is heavily focused on killing things. I'm just saying that combat encounters should be saved for those encounters where the number of opponents are manageable and the combat would be tactically challenging. For the rest of your wartime encounters - stick to skill challenges.

The above quote from the 4E DMG lists a number of interesting scenarios that might be related to war-time skill challenges:
Some of the above examples could be whole adventures, but for the purpose of this series I'll focus on treating them as complex skill challenges. In the next post of this series I'll start laying out some examples of skill challenges for the scenarios above, and how to handle them in 4th Edition Dungeons & Dragons. So, until then... stay tuned and GAME ON!!!
Posted by Jonathan Jacobs